Mr. Ittira Davis is the Managing Director & Chief Executive Officer of our bank. He is an international banker with over 40 years of banking experience, having worked extensively in India, Middle East and Europe. He was with the Europe Arab Bank from July 2008 to October 2012 initially as the Managing Director – Corporate and Institutional Banking and then as an Executive Director. He also previously worked with Citibank in India and the Arab Bank Group in the Middle East. He has been associated with Ujjivan since 2015 and played a pivotal role in its transition into a Small Finance Bank. Later, he was the Chief Operating Officer of the Bank until June 2018, after which he took charge as the MD & CEO of Ujjivan Financial Services Limited from July 2018 to March 2021. He was also an Additional Director (Non-Executive, Non-Independent) of the bank from March 13, 2021 till July 23, 2021. Mr. Ittira Davis is a graduate from the Indian Institute of Management, Ahmedabad (1976). Carol Furtado is the Chief Business Officer of Ujjivan Small Finance Bank. A prominent face of women in banking, she comes with 26+ years of banking experience in Retail Banking and NBFC domains with expertise in leading Business, Banking operations, Credit and People functions. Carol is a key member of the leadership team that laid the foundation and built Ujjivan. She was instrumental in the recognition of Ujjivan as a certified great place to work. She has previously worked with the ANZ group, Bank Muscat and Centurion Bank Ltd. In 2009, Carol was the recipient of the Financial Women’s Association award by Women’s World Banking in recognition of her demonstrated professional commitment. Carol is a post graduate from Mount Carmel Institute of Management, Bangalore, and has been part of strategic leadership programs conducted by Indian Institute of Management, Ahmedabad and Harvard Business School, Boston. Martin is the Chief Operating Officer of Ujjivan Small Finance Bank. He comes with over 25 years of experience covering Retail Banking operations, Retail Asset and Micro-finance Operations, with expertise in set-up and implementation of new processes. More importantly, he’s known for leveraging technology for operations innovation to create delightful customer experiences. After early stints with ANZ Grindlays Bank and Bank Muscat, he predominantly worked in the space of Operations and Customer Service at the Centurion Bank of Punjab , Centillion Solutions & Services. He joined Ujjivan Financial Services Ltd in 2009 as Regional Operations Manager, before taking charge as the Head of Operations, a post he held until January 2017. Consequently, he was appointed as Head of Operations of Ujjivan SFB in February 2017, where he channelled his vast experience in setting up the Operations vertical for the bank. Martin is a Computer Science Graduate from St. Joseph’s College of Arts & Sciences, Bangalore.

Arunava Banerjee was appointed the Chief Risk Officer of Ujjivan SFB on February 1, 2017. He has previously worked with the State Bank of India, Standard Chartered Bank and Bahraini Saudi Bank. He was also the previous Chief Financial Officer of Remza Investment Company WLL. He holds a Master’s degree in Arts (Economics) from Calcutta University and is an associate of the Indian Institute of Bankers. Ramesh Murthy is the Chief Financial Officer at Ujjivan Small Finance Bank. He is a Chartered Accountant and has completed the General Management Program from Harvard Business School, Boston, USA. He comes with 30 years of experience in Business, Risk Management, and Finance. Mr. Murthy has headed several key positions, such as Managing Director and Head of - Project & Structured Finance Division, Corporate & Investment Banking Group, Senior Vice President and Head - Credit Analysis & Portfolio Management, including Senior Vice President - Risk Management and Head of Wholesale Risk, among other roles in organizations like ANZ Grindlays Bank, Mashreqbank Dubai and Commercial Bank International PSC, Dubai. He was last associated with Karur Vysya Bank as the Chief Risk Officer from 2018 and as the Chief Finance Officer from 2020 to 2022 before his appointment at Ujjivan SFB. Ashwin Khorana is the Chief Information Officer of the bank. With an international career spanning 3 decades in banking, he has been a technology leader for financial institutions across Asia, the Middle East and Africa. His leadership and entrepreneurial mindset, in addition to proven expertise in driving Business-centric Technology Strategy helped steer a wide range of financial institutions to unprecedented successes. From building high-performing teams across geographies and cultures to leading initiatives that maximize ROI from technology investments, he accomplished it through a network of partners, contracts, governance frameworks and performance management. In his diverse and illustrious career, he had definitive stints with Jana Small Finance Bank, ING Vysya Bank, Standard Chartered, and many more paradigm-defining organisations, where he was key in influencing and shaping them by demonstrating leadership attributes of growth and collaboration. Moreover, he brings with him immeasurable knowledge in the space of physital experiences, web technologies and solution delivery in banking and finance, along with a keen eye for emerging trends and technologies. Ashwin Khorana is an alumnus of the Indian Institute of Management – Bangalore (2011). Ashish Goel is the Chief Credit Officer of our Bank. He holds a bachelor of technology degree in Mechanical Engineering from Regional Engineering College, Kurukshetra and is a post graduate in Marketing & Finance from Xavier Institute of Management, Bhubaneswar. He was previously employed at Godrej & Boyce, Marico Industries and ICICI Bank. He joined Ujjivan as Chief Credit Officer in February 2021. Rajeev Pawar joined as the Head of Treasury on January 20, 2020. He has previously worked with American Express Bank, Standard Chartered Bank, Kotak Mahindra Bank and Edelweiss Finance in India, Singapore and Dubai. He is an MBA from the Jamnalal Bajaj Institute of Management Studies, Mumbai and a Physics Major from the University of Mumbai. Brajesh Joseph Cherian is a banking and financial services professional with over 20 years of experience in Compliance, Operational Risk, Corporate Banking, Retail Banking and Treasury. Starting his career with the South Indian Bank ,he later on worked with Axis Bank in India and UAE where he handled various roles including Deputy CEO for Dubai Operations. Before joining Ujjivan in 2016, his last assignment was as Vice President - Compliance and Risk with Axis Bank, Mumbai. He holds a Bachelor’s degree in Pharmacy from Dr MGR Medical University and a Master’s degree in Business Administration from SMU. He is a Certified Associate of Indian institute of Bankers. 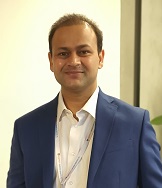 He is a qualified Company Secretary from the Institute of Company Secretaries of India and holds a bachelor’s degree in Law and a Diploma in Business Management. He also received NSE's Certification in Financial Markets (NCFM) for Compliance Officer (Corporate) Module. He has a corporate and investment banking experience of over 18 years and his last employment was with Ujjivan Financial Services Limited where he was last designated as the CEO & Company Secretary. Vibhas Chandra is an experienced hand in Ujjivan with a career spanning 14 years in multiple roles and managing various geographies. Joining as part of Ujjivan’s first Management Trainee batch, Vibhas was entrusted with responsibilities to launch Ujjivan’s micro-finance footprint in multiple states in its initial years. He was later hand-picked to establish their individual lending program, where he successfully built up a sizable portfolio. He led Ujjivan’s East region and played a key role in Ujjivan’s transition to a Small Finance Bank. Before being appointed as the Business Head of Micro-banking, he was leading the Asset Products for Micro-banking and Rural Banking.

An expert in micro-finance, Vibhas is an MBA graduate (PGDM-RM) from Xavier Institute of Management Bhubaneswar (XIMB). Sriram Srinivasan is the Head of Digital Banking at Ujjivan Small Finance Bank. He has a 22-year track record of building and leading cross-cultural, cross-functional teams of talented global professionals, in regions like Japan, Hong Kong, Singapore, India, Vietnam, and the UAE. During his long stint at CitiBank spanning 18 years, he played an instrumental role as the Head of Digital Technology, and then as the Head of Digital Solutions and Digital Engagement till 2015. He went on to create further impact at HSBC Asia Pacific, building the Regional Digital Center of Excellence based out of Hong Kong and China till 2017. Soon after, he joined Standard Chartered Bank as the Global Head - Digital Servicing, a position he held until 2019. Before his appointment as the Head of Digital Banking at Ujjivan SFB in February 2022, he served as VP - Market Service Center Head at Digital14, an Abu Dhabi-based Cyber Security company. Mr. Srinivasan has an MBA (PGDM) from IIM-Bangalore and a BE (Hons) from BITS, Pilani. Sathyananda Prabhu is the Head of Audit at Ujjivan Small Finance Bank. He comes with over four decades of experience in Internal Audit, Banking Operations and Information Technology, in addition to Risk Management and IS Audit. Mr. Prabhu is a B. Com LLB Graduate with a range of certifications in Information Technology, Information Security and Auditing. He started his career with Canara Bank in 1983, and eventually went on to head the IT Department and Information Security Auditing, a position he held until 2007. He later joined AUDITime Information Systems (I) Ltd as the Vice President heading the IT Governance from 2007 to 2009. Soon after, he headed the Internal Audit, Fraud Reporting and Vigilance functions as a Senior Vice President at Lakshmi Vilas Bank from 2009 to 2016. This was followed by a key stint as the Executive Vice President at Equitas Small Finance Bank, before taking charge as the Head of Audit at Ujjivan SFB. Parmeet is a banking professional with over 24 years of experience. In his last role, he was working with YES Bank, as Group Executive Vice President - FCU & was involved in Fraud Control & Portfolio Management / Analysis – Seeding, Process Review, etc. Prior to YES Bank, he was associated with ICICI Bank Ltd; where he served as the National Head – Acquisition Risk, Financial Crime Prevention and Reputation Risk Management and was involved in handling acquisition risk for retail assets and liability portfolio. He has completed his Master's in Management Studies, Master of Commerce and is a Certified Fraud Examiner (CFE) from ACFE, Austin. Sumit holds 15+ years of experience and his expertise lies in Retail Branch Banking, Wealth Management and Liability products. He has been associated with HDFC Bank and ING Vysya Bank (Now Kotak) in the past, managing various roles starting from being a personal banker to handling various leadership roles at branch and regional levels. He has been with Ujjivan since Dec 2016 where he started as a Regional Sales Manager for building liabilities business for Delhi, Haryana and Punjab. Later he was promoted as Regional Business Manager for North and established 116 branches in the region. His next role involved heading the Liabilities product at Corporate Office and from Feb 2022 onwards he took up the responsibility of Heading the Branch Banking, TASC and TPP business. Sumit is a Post Graduate in Marketing from Symbiosis Institute of Management Studies, Pune Chandralekha joined Ujjivan in Apr, 2008 as part of the institution’s first batch of Management Trainees. Since then she has been instrumental in setting up and handling various positions across the organization. She was instrumental in setting up of the Credit function in the Eastern region for the organization. She has then worked in the Western region in Credit Microbanking team as Regional Credit Manager before moving as the Regional HR Manager for the same region. Post that she has managed the role of National Manager for Talent Acquisition and integration in HR. She holds a Law degree from Symbiosis School of Law and PG certificate in Human Resources from XLRI, Jamshedpur.